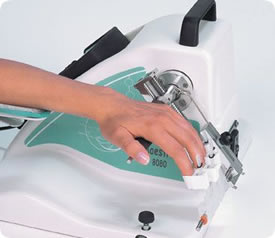 Treatment is recommended particularly when there is a contracture of a finger that is starting to cause difficulty using the hand, for example the finger may catch on things. The most 'minimal' treatment is a needle fasciotomy, performed in the clinic under local anaesthetic, where a tight band of diseased tissue is simply divided. This is done without any incisions – the point of a needle is used. This is a good treatment for early disease and has the advantage of a quick recovery, there are no incisions and no stitches. Needle fasciotomy is suitable when the contracture is affecting the joint at the base of the finger but is not usually advised where the joints in the finger itself are involved. For more advanced disease surgical treatment is often recommended; this is called fasciectomy. In the fasciectomy operation, the diseased tissue is removed. This operation is done under general anaesthetic as a day case procedure. Dupuytren's disease can recur, and in these cases a somewhat more complicated procedure where the tight band of tissue and the overlying skin are excised; this is called dermofasciectomy and involves a patch of skin graft.

A new injectable treatment for Dupuytren's contracture is an enzyme that breaks down collagen (the substance that the tight bands of tissue consist of). These injections are straightforward and performed in clinic.

The treatment involves two stages; the first stage is the injection which weakens the tight band, the second stage (performed the next day) involves firmly stretching the finger to break the band and straighten the finger. The second stage is done in clinic with local anaesthetic injections first. This therapy is not suitable for all cases of Dupuytren's contracture; I will discuss the options with you after careful assessment.

Dressings are removed a few days after surgery and a hand therapy programme is started (specialised hand physiotherapy). A custom made splint is worn at night for 2-3 months after surgery. The hand is usually healed by 2-3 weeks and most patients start to return to manual activities at this time.